skip to main | skip to sidebar

“Ye know that the princes of the Gentiles exercise dominion over them,

and they that are great exercise authority upon them.

But it shall not be so among you:

but whosoever will be great among you, let him be your minister;

And whosoever will be chief among you, let him be your servant:

Even as the Son of man came not to be ministered unto,

The word the Athenians used for their Assembly was Ekklesia, the same word used in the New Testament for Church
(and it is the greatest philological irony in all of Western history that this word,
which connoted equal participation in all deliberation by all members,
came to designate a kind of self-perpetuating, self-protective Spartan gerousia -
which would have seemed patent nonsense to Greek-speaking Christians of New Testament times,
who believed themselves to be equal members of their Assembly.)

- Thomas Cahill, Sailing the Wine-Dark Sea: Why the Greeks Matter

A MEMBER OF THE ELECTIONS COMMITTEE SETS THE RECORD STRAIGHT

Moderators' Note:  In the recent letter we received from the Metropolitan prior to his ratification of 13 of 15 elected parish council members, some controversy has arisen. The Metropolitan was obviously informed as to highly specific stewardship issues with some of the newly elected members. It was - erroneously - assumed that the Election Committee had informed the Metropolitan of the "stewardship problems".

Mr. Dean Dinas, member of the Election Committee, has asked that we post the following comments he would like to make regarding the subject.


I summarize below the process as it occurred during this Parish Council Election:

a) The Metropolis of Denver recognized our vetting process as meeting their [temporarily relaxed] standard for Parish Council candidates this time, and the clergy+Holy Trinity Cathedral Administrator solely reviewed Stewardship records.

b) After they were satisfied the candidates met the Metropolis' standard, they sent [just] the summary to the Metropolis; the Election Commitee never had access to Stewardship records, and, per UPRs, accepted the vetting process, and this level of detail was never shared with the Metropolis of Denver.

c) The Election Committee and office of the GOCSLC which sent the summary of this vetting process had no other contact with the Metropolis of Denver between the time they sent the vetted list to the Metropolis and after the Elections.

d) At no time during this process did the detailed Stewardship records of the Parish Council candidates leave the control of the Holy Trinity Cathedral church office or the clergy who vetted the candidates to run. There was no reason for any database containing these records to be accessed or shared, other than for the purposes of LOCAL church office analysis in the vetting of the candidates.

As a member of the GOCSLC Election Committee, I can confirm the above, since I was in continuing contact with the Holy Trinity Cathedral Administrator to ensure we were all in compliance with the Metropolis of Denver standards, and the UPRs as they applied to the Election Committee.

Your newly elected parish council completed the oath of office yesterday and will begin fulfilling our commitment to you effective immediately. We have met and elected officers. They are as follows:


Our goal is to unite the community and return it to the vibrant Greek Orthodox Church and community it once was. We have a lot of work ahead of us and we are confident that each of you will help us in any way you see fit. We will communicate with you and keep you informed on ALL community issues as soon as we engage in the transition process and have a better understanding of the current status. We thank you for giving us the opportunity to be of service.

THE LEADER WE DESPERATELY NEED! 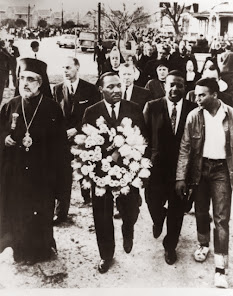 Where have all the LEADERS gone?

Click HERE to download and print a Stewardship Pledge Form and send to Church Office with your pledge payment. 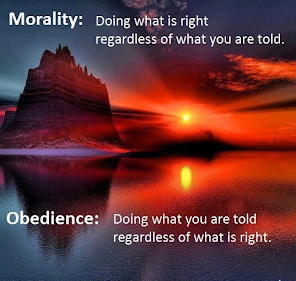 TRANSLATION? (Please note the translations are not exact)

The UPRs, as currently enacted, have succeeded in proving that power corrupts, and absolute power corrupts absolutely. Having witnessed events first-hand for so long now, it is hard not to come to the sad conclusion that some of our clergy actually seem to relish the controversy, despite any inherent intellect, ability and talent.

Unfortunately this “brave new church”, spawned by these vaunted UPRs, and by this ridiculous and inept notion of the church as a military-style hierarchy, fosters a lack of humility, tact and compassion. It promotes utter disrespect and disregard for the laity, which, in turn, promotes disrespect for the clergy. The schism the regulations profess to prevent is the schism they are now engendering.

A QUESTION OF "RESPECT"?

The truly silly aspect of this ongoing and absurd situation is that the clergy has always had built-in advantage in their relationships with the laity. The collar and cassock inspire and command respect right off the bat - the rest of us, in our professional and social interactions have to earn the respect beforehand. No one hopes his or her priests will fail. The clergy here lately have actually had to work at it to lose the respect of their flock!

SOMETHING TO THINK ABOUT

Question: who builds a gazebo and barbecue deck in their yard when the roof of their house is caving in?

Answer: Fr. Michael and his supporters. Surely the Proistamenos-of-Prophet-Elias-only could have prevailed upon the donors to fix the DOME of the church as a means to honor loved ones, before proceeding with less critical projects? Apparently not.

Misconstrued? WE THINK NOT!

Father Michael has been overheard recently to CLAIM that Mr. Jaharis' remarks were totally "misconstrued" by Theodore Kalmoukos in a recent op-ed piece written in the National Herald.

So that there is NO confusion, Mr. Jaharis' original remarks may be read in their entirety - without Mr. Kalmoukos' perspective - here. 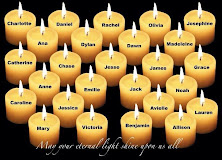 Rest in peace, our faithful brother, Con Skedros - a GIANT in this community!

FALSE INFO? WE DON'T THINK SO!

The Metropolitan accuses many of providing false information with regard to parish property. He cites that the UPRs state that the parish holds title to all its real estate and personal property. He asks "what is the argument"?
One could be tempted to find comfort in this citation, if not for two other existing UPR conditions.
The first is that the Parish Council holds all control of said properties owned by the parish. Since the Parish Council can be disbanded, presumably at the whim of a peevish hierarch, where has the control shifted?
Second, if the laity becomes so exasperated with this sorry state of affairs that it reduces funding (the only real power left to it under an obnoxious system where the laity is utterly marginalized) and if a community is declared in disarray, or in schism, it is the hierarchy that comes in to take the real property. (This action was, in fact, attempted in 2009 in Charlottesville, Virginia.)


"The high destiny of the individual is to serve, rather than to rule."
- Albert Einstein

If you're unsure how to post to a blog, please feel free to contact us at tocbslc@gmail.com. We will post your opinions or comments for you.

There is a danger in the amassing of the Church property under one control. As the Catholic Church learned (the hard way) in sexual abuse cases that the the entire property holding will be subjected to payment of a lawsuit. Much better to decentralize!
This is a well-known business practice where corporations incorporate separate facilities so if one has poor results it can be dissolved without damaging the entire corporation. A single store could become bankrupt but not the whole.

Please click here to read George D. Karcazes' excellent piece, Reflections on the meaning of the "Hierarchical Church" in America. 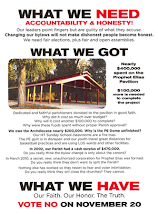 AN EXAMPLE FOR ALL COMMUNITIES!

THE CHURCH AND THE VOICE OF THE PEOPLE

From the Special General Assembly, June 27th, 1999: "First and foremost we are a church (ekklesia--meaning the people) any decisions should help minister to the people, effective, and efficient ministering to our peers. The Church has to do with people; people are the most important." - Fr. John Kaloudis
==========================
«Η έκκλησία δεv είvαι εξoυσία, ειvαι διακovεία.»
"The Church's purpose in not that of dominion or power; it is that of service."
- Ieronymos, Archbishop of Athens and All Greece
==========================
“Our lives begin to end the day we become silent about things that matter.”
- The Rev. Martin Luther King, Jr.

ON A COLD AND RAINY OCTOBER AFTERNOON ...

Today, October 24th, 2010, at 2:00 p.m. nearly 350 Greek Orthodox Christians gathered to say that voices may NOT be stilled or stifled. Of those who attended, 347 registered to participate and to vote; 339 actually cast ballots. Three questions (in synopsis form here) were asked, with both English and Greek ballots provided:
1. Asked if those assembled agreed with the decreed split, or if they would prefer to remain united. Vote: 328-FOR UNITY; 11-FOR SPLITTING
2. Asked if those assembled would favor the formation of a committee to appeal to the Archdiocese, the Eparchial Synod, and the Patriarchate. Vote: 330-FOR; 9-AGAINST
3. Asked if those assembled favored exploring legal action to prevent or challenge the division of the Parish in civil court, recognizing that the option would involve considerable expense. Vote: 248-FOR; 91-AGAINST

Φωνή λαού, οργή Θεού.
Vox populi, vox Dei.
THE VOICE OF THE PEOPLE IS THE VOICE OF GOD.
WE STAND IN SOLIDARITY WITH OUR GREEK ORTHODOX BRETHREN IN LYNN, MASSACHUSETTS WHERE PRIESTS AND PARISH COUNCIL MEMBERS, AND THE LAITY ARE HEROES!!! BRAVO, PAIDIA! PANTA AXIOI!!!
For those interested in following events in Lynn, Massachusetts, please click here: http://stgeorgechurchlynnma.blogspot.com/

Those who are tired of hearing that "the church is not a democracy," might find the article at this link interesting.